Despite these words of encouragement, the city has no set date to implement a policy approved in 2019 that was supposed to go into effect long ago. That resolution was meant to prohibit beachfront concessionaires from using single use-plastics and to hold them accountable for removing litter from their property, regardless of whether trash was produced by the owner.

In 2020, during what would have been the initial “educational period” for the law, then interim city manager Raul Aguila delayed this requirement until further notice due to the COVID-19 pandemic.

The resolution is currently undergoing revisions, according to Melissa Berthier, the director of communications for the city.

“The effort is currently underway,” she says.

Berthier says concessionaires will be responsible for removing trash from the area where they operate at some point. 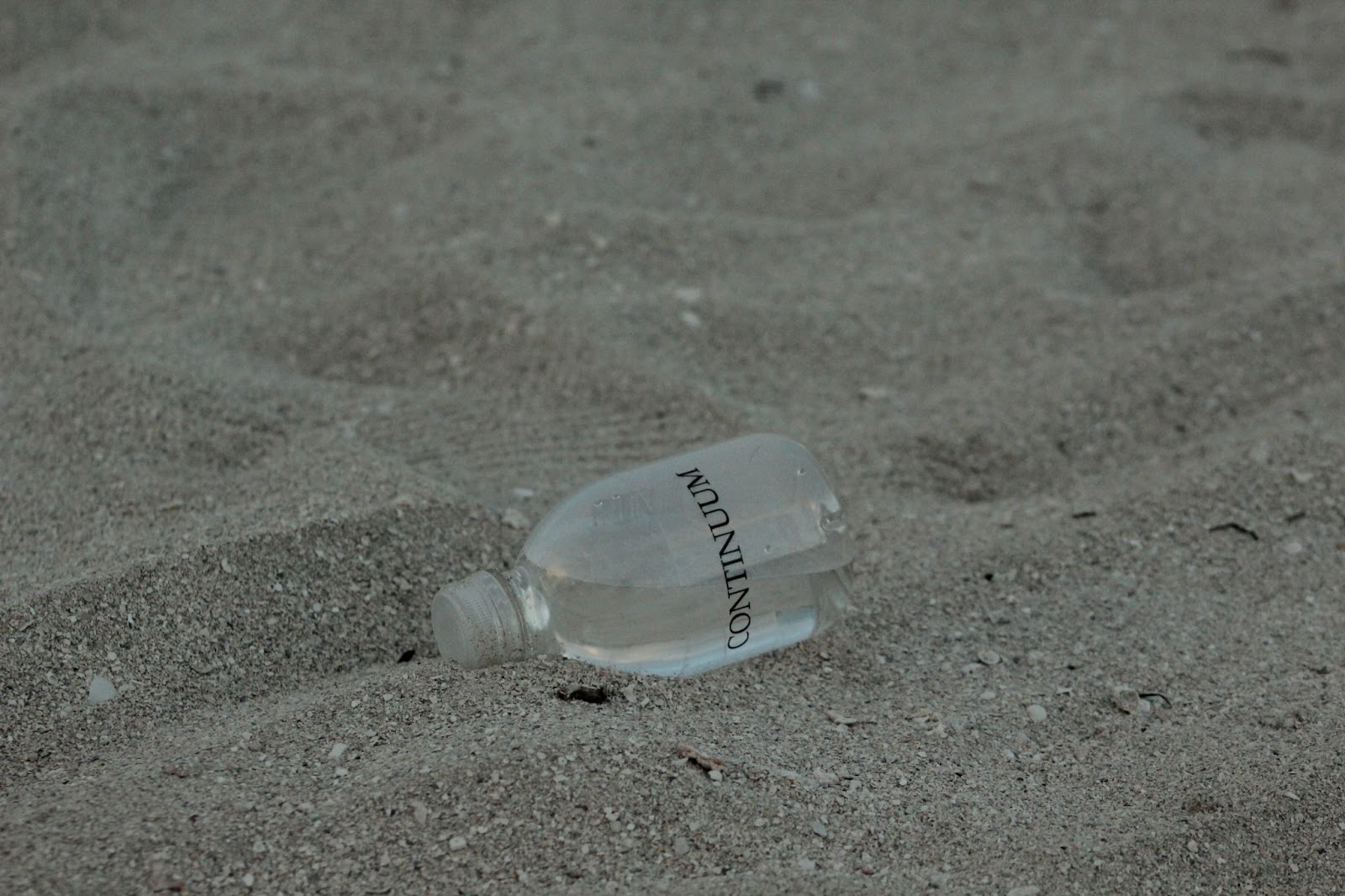 A plastic water bottle from the Continiuum in South Beach is left on the sand. (Jake Frederico/SFMN)

“It should be noted that this process is being followed by concessionaires throughout the major portion of our beach, but unfortunately not 100% at this time,” Berthier adds.

A day at South Pointe beach confirmed that comment.

At least three employees of Continuum, a luxury condominium with beach access and concessions, ignored litter in their work area as they closed. Two employees sat on a golf cart parked next to trash while one ate from a plastic container with a plastic fork on March 7.

At the end of the day, trash and plastic was left behind in the perimeter of the concession area.

At least six water bottles, multiple plastic bottle caps, three straws; one plastic and two paper, napkins, a lighter, and a to-go container were left within the Continuum concession area at the end of the day following the staff’s departure.

This is not an isolated incident. Similar scenes can be found next door at Nikki Beach as well as at Bentley Beach. Plastic cups, bottle caps, menus, cigarette butts and ketchup packets are just some of the trash left behind in areas that are operated by beachfront concessions.

It is a pattern that continues on up the coast of Miami Beach.

Berthier acknowledges that the city does see repeat-offenders failing to comply with city regulations. She says this is typically due to high-turnover amongst employees and inadequate onboarding at these locations and that the city is working with concessionaires to hold more effective orientations for new employees .

The resolution would have made violations like the ones observed at the Continuum, punishable by a fine up to $1,500. As of now, only verbal warnings are given by the city.

Mayor Gelber at first agreed to speak with SFMN regarding these violations, but then canceled the meeting once his staff learned of the reason for the meeting.

Veronica Paysee is in charge of communications for the mayor and commission.

“When he talks about plastic— he’s a champion for that,” she says of the mayor, who prides himself as being climate-forward mayor in a city that has been dubbed ground zero for the climate change crisis by the World Wildlife Fund.

Mayor Gelber has made headway in the fight against single use plastics in the city. In 2019 plastic straws and stirrers were banned citywide. In March, the city struck a 10-year deal with Pepsi which states the company will sell 100% plastic-free sodas and waters in city-owned venues, public parks and beaches.

However trash, plastic and already-banned polystyrene are still being left behind on beaches every day, a major setback in the mayor’s vision.

Responsibility for monitoring beach litter is the city’s beach maintenance division who monitors and reports violations of littering.

The beach monitor role, which closely enforces regulations, has been unfulfilled since November 1, 2021.

John Ripple is beach maintenance director for the city. He declined to comment when asked about the unfulfilled role of beach monitor.

Berthier says that this practice has been identified as a priority to be addressed in the coming weeks.

A priority left unfulfilled for more than six months. She says the city is in the process of fulfilling this role.

Berthier encourages the community to inform the city when they see violations. Litter violations can be reported here, by phone at 311 or though the city’s e-gov app.